Four years ago, Eric H. Cline has published his exciting book "1177 B.C.; The Year Civilization Collapsed". On the backcover of the book we read:

"After centuries of brilliance, the civilized world of the Bronze Age came to an abrupt and cataclysmic end. Kingdoms fell like dominoes over the course of just a few decades. No more Minoans or Mycenaeans. No more Trojans, Hittites, or Babylonians. The thriving economy and cultures of the late second millennium B.C. suddenly ceased to exist. How did it happen?"

We read also:
"In this major new account of the causes of this "First Dark Ages," Eric Cline tells the gripping story of how the end was brought about by multiple interconnected failures, ranging from invasion and revolt to earthquakes, drought, and the cutting of international trade routes. Bringing to life the vibrant multicultural world of these great civilizations, he draws a sweeping panorama of the empires and globalized peoples of the Late Bronze Age and shows that it was their very interdependence that hastened their dramatic collapse and ushered in a dark age that lasted centuries."

In my recent books, I have presented the first ever theoretical order of all previous civilizations of our Genus (and Species) Homo Sapiens Sapiens: 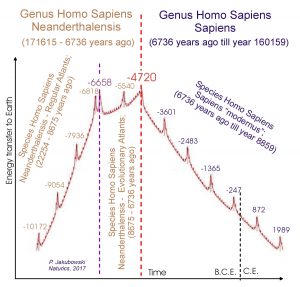 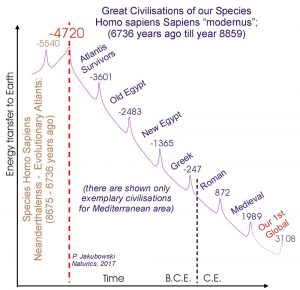 We see that Cline's book describes the end of the third Great Civilization of humankind after the recent cosmic quantum jump in our Solar System, which culminated 4720 B.C.E.:

Each of the previous civilizations had the theoretical life-span of 1118 vears. During that period of time the global life on Earth always follows the same energetic schema:

The period of time described in Cline's book has its energetic peak in year 1365 B.C.E. All later events, which brought the civilization to collaps were the results of that cosmic energy-transfer, including cosmic-bodies impacts, intensified volcanic and seismic activity, finally resulting in massive climatic changes, which no civilization was able to overcome.

The same global energetic schema of changes is to be expected during the running millennium for our own, present, First Global Civilization:

Are we ready to seriously consider this cosmic fate and to prepare our children and their children to those coming changes?