A few years ago, Benjamin McCall, Professor of Chemistry at the University of Illinois (now with the University of Dayton), has published a very interesting lecture "The Diffuse Interstellar Bands: A Long-Running Mystery". The shortest synopsis of his lecture is: "What are the DIBs? Greatest unsolved mystery in spectroscopy!" Unfortunately, his lecture is not easy to follow for non-specialists in spectroscopy. And he doesn't conclude the most important question concerning the mystery.

In looking among many articles to the Diffuse-Interstellar-Bands mystery, I have finally found a short post (from 2013) on the Gizmodo-Platform, very clearly written by Esther Inglis-Arkell: "Will we ever solve the mystery of diffuse interstellar bands?" And she gives the suggestion I was awaiting already many years ago! But let us introduce the problem with Esther's words. She writes:

"There are dark lines in space, and they hide in the light. We've known that they're there for nearly a hundred years, but we still don't know what they actually are. All we know is what we call them - diffuse interstellar bands - and that they mean that something is out there in space that we haven't identified." Almost hundred years ago (1922) astronomer "Mary Lea Heger spotted the first example of what has become an enduring mystery. She noticed that a binary star system's spectrum of light — the rainbow-like range of wavelengths of light emitted by bright objects — had gone dark in a couple of places. This wasn't unusual. These were absorption lines. All atoms and molecules absorb certain wavelengths of light while letting other wavelengths through." (Compare Fig. 1 and Fig. 2.) 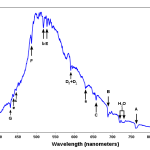 These absorbed wavelengths show up as dark lines on the continuum of color in a spectrum. 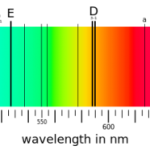 Fig. 2. Solar spectrum with Fraunhofer lines as it appears visually.

"What was unusual was these lines weren't shifting. Generally, in a binary system, the stars are moving toward and away from the viewer on Earth. As they move, their spectrum lines shift, much the way the sound of a car horn shifts if it's moving towards or away from you. These lines weren't shifting. (my text marking here and below; P.J.) After some analysis, it was discovered that the lines weren't shifting because they came from material that was between the stars, not part of them, but to this day, no one has been able to lock down what exactly these lines are. The absorption lines, called diffuse interstellar bands, or DIBs, pop out all over the electromagnetic spectrum. There are hundreds of them in space. Generally, this would be helpful information. Scientists use absorption bands just like these to determine what atoms are present in space. Different atoms emit or absorb different wavelengths of light. By looking at what emission or absorption lines show up on the spectrum of light given off by celestial objects, scientists know that an exoplanet's atmosphere contains, for example, oxygen, or nitrogen.

These lines are different. Scientists think these absorption lines are the sign of complex molecules. Atoms give off light when their electrons shift from one orbit to another and then fall back down. It's a simple and defined process. Molecules are made up of many different atoms, and those atoms crowd close to each other in ways that make one atom interfere with the normal spectrum of another. What's more, both the atoms in molecules and the molecules themselves, wiggle around. Their absorption and emission lines depend on their inner and outer position. Nobody has found any that can exactly correspond to the DIBs."

Recently (2015) Fullerene C60+ has been supposedly identified as carrier of two diffuse interstellar bands. However there are still more than 500 DIBs with unknown origin.

And now is the proper time to present the splendid suggestion by Esther.
"So what could the DIBs be? They could be ordinary substances whose spectrum lines are changed by the unique conditions of deep space. They could be tiny diamonds. They could be anything from carbon nanotubes to alien bacteria. We don't know. All we know is they're definitely up there. And they're dark." (My congratulation to Esther; P.J.)

It is exactly what I am saying during the recent three or four decades. The unique conditions of deep space do change the spectrum lines of the ordinary substances. To be precise, there is only one unique condition: the speed of light in the calculation of all DIBs has to be correlated to the mass density of the observed regions of the "deep space". It is never a vacuum. And the speed of the electromagnetic waves is there never the Einsteinian vacuum-speed of light.

If we (or our computer programs) change the speed of light in those calculations, it could be (I am sure, it will be) that all DIBs will suddenly appear as the absorption lines of the well-known basic chemical compounds.